Legendary Raids: How To Find And Beat Articuno And Lugia

Legendary Raids have finally arrived in Pokemon GO, flying out to the world at large after a confusing  but oddly successful reveal at Pokemon GO Fest in Chicago. First up are Lugia and Articuno, two capable contenders that will take some doing to fight. But the name of this game, as we all know, is to catch ’em all. So here’s how you’ll want to go about finding, fighting and beating Articuno and Lugia.

Finding a Legendary Raid is pretty much the same as finding a normal one: the raids that you’re interested in are indicated by five little Rhydon icons, and you’ll see a big, majestic bird next to each. Raid countdown timers do not seem to be appearing anymore, so the birds will just show up when they show up. You can either check gyms around you, or see if your area has a tool like this one to search wider. It’s worth noting that for right now, the concept of a Legendary Raid Pass does not appear to have made its way into the game. Legendary Raids work much like normal Raids in this regard: you just need to find the raid and spend a standard pass to get in .

When it comes to fighting, think of this as a raid on steroids. You’ll want to get your best Pokémon in order, no doubt, and you can refer to  raid counters to figure out how to plan your team. As a rule, Dark-type is a good counter for the Psychic-type Lugia, and Fire is a good counter to Articuno’s Ice. Stone-type counters Flying, so those attacks can be reliable against both. One word of advice: Lugia sometimes comes at you with the water attack Hydro Pump, which can decimate otherwise solid counters like Tyrannitar or Golem. 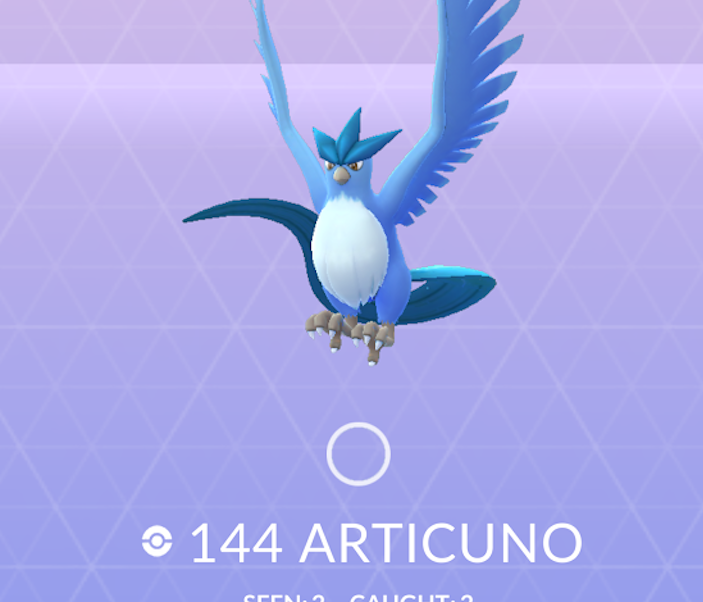 But that’s not going to take care of things on its own. Raids are about fighting as a team, and that’s absolutely paramount with high-difficulty Legendary Raids. Far more important than getting your own house in order is making sure you’ve got the requisite teammates to finish things off.

(As usual, this whole process is going to be a lot more difficult for trainers living in rural and suburban areas. This has been a struggle for Pokemon GO for the start, and the Raid update remains slanted towards players who live in denser areas)

Raids now last for two hours, so it’s a bit more difficult to show up and hope for a team, but you’ll be best off waiting a few minutes to show up: without countdown timers, any trainers traveling to a raid will need a second to get there. If you’re showing up alone, my best bet would be to bring a book, or maybe choose a raid with a bar nearby. If you’ve got some sort of Pokémon gear, wear it so that people know you’re playing. Make sure to puff your chest out, so the normies know what you’re all about. An external battery pack is another reliable indicator of a fellow player.


The next level is to up your coordination game. Bringing a friend or two is a good start, but the best way to go is to head to social media. Many cities and other areas have Facebook groups, Discord channels or subreddits where people organize raids, so that might be a good way to see how many people are heading to a given raid. If you find yourself at a raid with some other people, say hi: they might point you towards the best resources in your area. It’s a bit intimidating at first, especially if you don’t think of yourself of the kind of person that joins a Pokémon-oriented Facebook group, but take a leap. You’ll like it.

Once you’re in the fight, it’s a lot like a regular Raid. You’ve got far more time to defeat a Legendary Bird, but you’ll still want to be stingy about dodging to make sure your damage output is as high as possible. Also remember that if all of your Pokémon go down, you can always head back in with new ones or revive the ones you have. With more time in the fight this becomes much more effective.

If everything comes off right, you’ll wind up with a shot at catching an Articuno or a Lugia. At that point, you’ve just got to nail your curveballs and hope for the best. Happy hunting.