The Latest feature in Pokemon GO needs a Raid Pass to join a Raid. Two types of Raid pass are available Free and Premium. The only difference in Free and Premium pass is that a Free Raid Pass is obtainable by spinning the Photo Disc at a Gym, while the Premium Raid Pass is purchasable in the Shop.

Both Passes work the same, however, the Free Pass comes with several limitations discussed below. 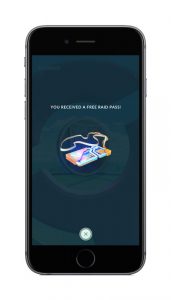 After entering the lobby, you will be able to see how else is fighting the that Raid with you. Free pass can be used once a day and you can not hold more than one pass at a time.

You need to buy Premium pass to fight more than one Raid in a day.

How many times can I raid per day?

Trainers can raid as much as they want but have to buy Premium Raid Passes for that. As only 1 Free pass can be obtained each day.

Can I use a same Raid Pass on multiple raids?
No, you can not. Once used, a Raid Pass disappears and the Raid for which it was used becomes available. If you don’t manage to defeat the Raid Boss inside the 2 hour period after the raid has started, you have essentially wasted your Raid Pass.

STAB Explained – How it is different from normal Damage