Considering the massive success that is Pokemon GO, it’s not surprising that other developers have attempted to emulate it. While there are numerous Pokemon GO clones out in the wild, the most prominent is Draconius GO, a very similar game that has players collecting different species of dragons using Pokeball-like objects called spheres. 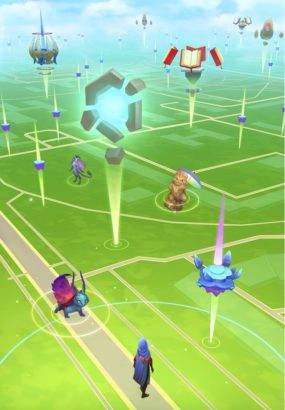 A common complaint lobbied against Pokemon GO since its inception has been poor support for players in rural areas. In fact, some players may be completely out of luck when it comes to enjoying the game if they live in the country or in a smaller town. With the addition of raids, which often require a large group of players, Pokemon GO has continued to alienate fans in rural areas, despite Niantic’s insistence that it will improve the game for them.

Pokemon GO may not provide the best experience for rural players, but Draconius GO goes out of its way to make the game fun for all players. Draconius GO‘s version of PokeStops – called Pillars of Abundance in Eyland’s game – appears every two hundred meters, so players can collect plenty of items regardless of where they live.

Speaking of the Pillars of Abundance, Draconius GO players tend to get more rewards from them compared to Pokemon GO‘s PokeStops. Players will find themselves showered in spheres and other helpful items after just a few stops, whereas rewards from PokeStops in Pokemon GO are decreasing.

Niantic has recently made numerous changes to PokeStops that make them less appealing, as they now give out fewer rewards and are far less likely to drop certain items. While Niantic hasn’t offered an explanation as to why it decided to do this, it seems likely that the recent PokeStop changes are an attempt to convince more players to purchase the game’s microtransactions.

Pokemon GO players have been waiting for a number of features to make their way to the game, with Pokemon trading and PvP battles topping the list for many fans. Well over a year after Pokemon GO‘s launch and fans are still waiting on both of those often-requested features, but anyone looking to scratch their PvP itch in a similar game may want to check out Draconius GO, which lets players battle it out using their captured monsters.

While Pokemon GO is plenty of fun and has developed a very large community of dedicated players, there really isn’t all that much to do in the game besides hatch eggs and catch Pokemon. Draconius GO attempts to give players more objectives to complete, specifically by adding quests. While these quests are rarely extravagant or complex, they do provide some interesting objectives besides Pokemon GO‘s static daily quests of hitting PokeStops and catching Pokemon.

Another way Draconius GO manages to keep things a little more interesting in its minute-to-minute gameplay is through random events. As players are out catching monsters and completing quests, they will sometimes randomly be attacked by enemies. Players can choose to fight these enemies or run, but successfully defeating the monsters will give players extra rewards. Since the Pokemon franchise revolves around random battles, to begin with, it is odd that Pokemon GO has yet to feature random events itself.

While these are some ways Draconius GO may arguably be “better” than Pokemon GO, there’s no denying Niantic’s game has the advantage in other areas. Perhaps the biggest way Pokemon GO has a leg up over its competition is its inclusion of recognizable and popular monsters that have decades of history, whereas Draconius GO‘s roster consists of entirely new creatures. Maybe if Draconius GO becomes popular enough, though, we will have another monster-collecting mega-franchise on our hands.