Pokemon GO Legendary Raid Battles have been datamined, shedding light on how the new Raid system will be used for Legendary Battles. To participate in a Leg. Battle, you need to have a special Legendary Pass, similar to other Raid Passes, but awarded only to exceptional players around the world.

Legendary Battles feature same boss-scaling mechanic that is used in other Raid Battles, however, the Combat Power and Stat multipliers are different.

Before a Legendary Raid begins, a special Legendary Egg will appear on the map and nearby trainers will receive a Legendary notification. 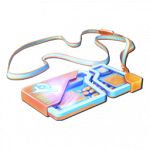 
Niantic has confirmed that these Passes will be given only to “those who were very active in the gym system to give them a chance at catching legendary Pokemon at a later date.”

It’s expected that the Legendary Raid pass will feature different mechanics than the ordinary Raid Passes. For now, it’s confirmed that it won’t count towards the 1-Raid-Pass-in-inventory limit.

Trainers who get the opportunity to participate in Legendary Raid Battles will have the privilege of obtaining a special badge that shows how many Legendary Battles you have won.

The badge comes in three levels: bronze, silver and gold. The exact numbers are not yet known, but we expect them to be rather low (1 for Bronze, 5 for Silver, 10 for Gold).

Please note that the badge is for Battles Won and not for Legendaries captured. It’s likely that you will have to battle a Legendary Pokémon several times before capturing it successfully.