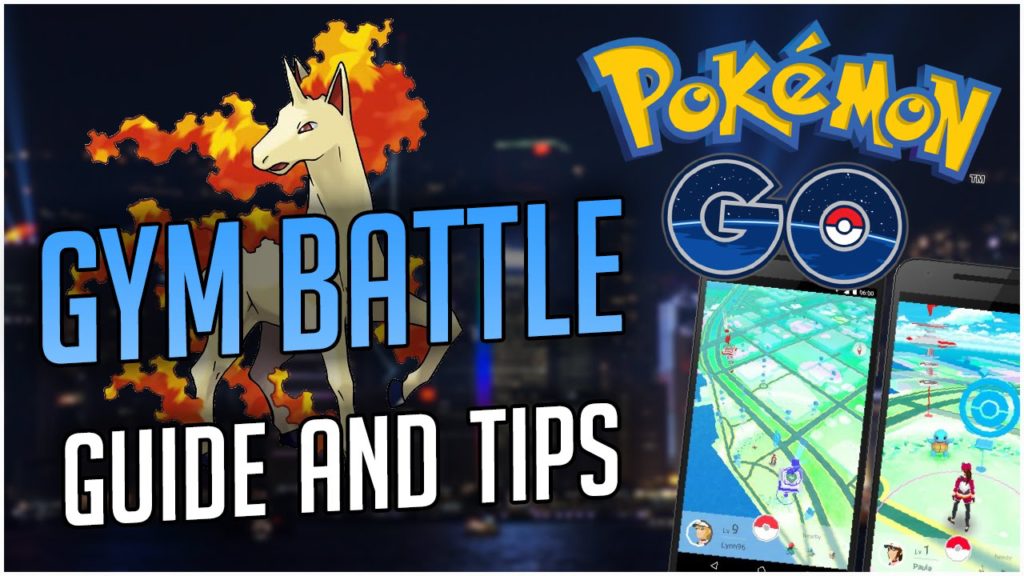 In addition to color, the size of the Gym will scale on the map to represent its current level.

Trainer need to reach level 5 to fight in a Gym, after which they will be prompted to join one of the game’s three teams.

If a Gym is empty, the Trainer may put a Pokemon of their own into the Gym and claim it for their team.

The Gyms’ levels are based on the amount of Prestige they have, and can only hold one Pokemon for every level. Trainer may put one of their Pokemon into the Gym, assuming they don’t already have one assigned there and Gym level is higher then the number of Pokemon assigned. The highest level for a Gym is 10, with a capacity for ten different Trainers’ Pokemon.

To increase the level of the Gym, Team members have to increase the Gym’s Prestige. The Pokemon are displayed and fought in order of lowest to highest CP scores.

Prestige required for Gym levels are shown below. Level 10 is the max level a gym can reach.

Taking down a Gym

Trainers are allowed to take 6 Pokemon, which are chosen randomly but can also be changed according to trainer’s preference.  For defeating every enemy team Pokemon 1000 prestige points are reduced and if you defeat the Gym Leader extra 1000 reduction take place.

Trainer can fight in their Team Gym to level it up and assign more Pokemon’s. Process is same as taking down a gym but prestige points mechanic is different.

When training, if defending Pokemon’s level is higher than the trainer, it’ll be scaled down to match. Prestige and experience gain depend on Attacker CP (A) and Defender CP (D), with following rules:

After assigning a Pokemon to a gym, trainers no longer retain control of that Pokemon until it’s knocked out from the gym. Instead, the defending Pokemon is controlled by a rudimentary AI in battle.

Player-controlled attackers and AI-controlled defenders fight under a different set of rules:

These mechanical differences mean that defenders deal less damage, but they can also tank more damage in battle. The defender can also potentially use more charge moves, since over a round of battle, they will be gaining more energy from damage received. The defender effectively has access to another HP bar’s worth of energy in a full battle.

Not the actual attack called Quick-Attack, but rather a Pokemon’s basic attack. This is usually a simple, fast attack that still has a type. To perform this attack, tap directly on the screen.

This is a slower attack that has a longer animation time, so it is important to time it when the opposing Pokemon isn’t attacking frequently. It deals more damage than the basic attack, and can only be used when one of the boxes at the top of the screen is filled by performing basic attacks. It is performed by pressing and holding down on the screen for a short amount of time.

When attacking an opposing gym, the attacking trainer may choose up to 6 Pokemon to place in his lineup. When a Pokemon faints, it is automatically switched out to the next Pokemon in the lineup, from left to right, top row to bottom row.

The attacking trainer can also opt to switch out Pokemon mid-battle, perhaps to leverage a more favorable type matchup or to prevent a Pokemon from fainting.

Trainers who have their Pokemon in a Gym get a reward other than glory for having control of a Gym. In the Shop, there is a button at the top right that displays a shield and a number inside of it. The number will display the amount of Pokemon you have defending Gyms, and can be tapped once every 21 hours to collect Pokecoins and Stardust. This is currently the only way to obtain Pokecoins other than purchasing them. You can control more gyms, but the maximum for collecting rewards is 10 gyms, which equals 5000 Stardust and 100 Coins.

After a battle, your Pokemon may be left with low HP, or worse, have fainted! They unfortunately will not heal on their own and will need your intervention. Note that Pokemon can only faint in rival Gym Battles – and training with the friendly Gym will only lower your Pokemon’s health to 1.

If you are fighting a rival Gym, defeating the team’s pokemon will slowly lower their prestige rating until defenders are forced to drop out as the Gym’s level lowers – until only the leader is left. By repeatedly defeating the leader until the Gym’s prestige lowers to nothing – the gym will become neutral and claimable by you.