Draconius Go has a lot in common with Pokemon Go. A Pokemon Go player will find it easy to get started and understand the gameplay.

But that does not mean Draconius Go does not have anything new to offer, it has built upon what was missing in Pokemon Go.

Same way type effectiveness different, as Draconius features only 5 types (elements) which exist in perfect balance: each element is super effective over only one other element, each element has one direct counter and one indirect counter.

As is the case with most element-based combat games, such as Pokemon Go, elements do not directly counter each other, they do it in a rock-paper-scissors pattern. The same is the case for Draconius GO.

This relationship is best described by the following image, depicting the Draconius GO type effectiveness chart.

Note: Arcana is marked as Dungeon in this picture. 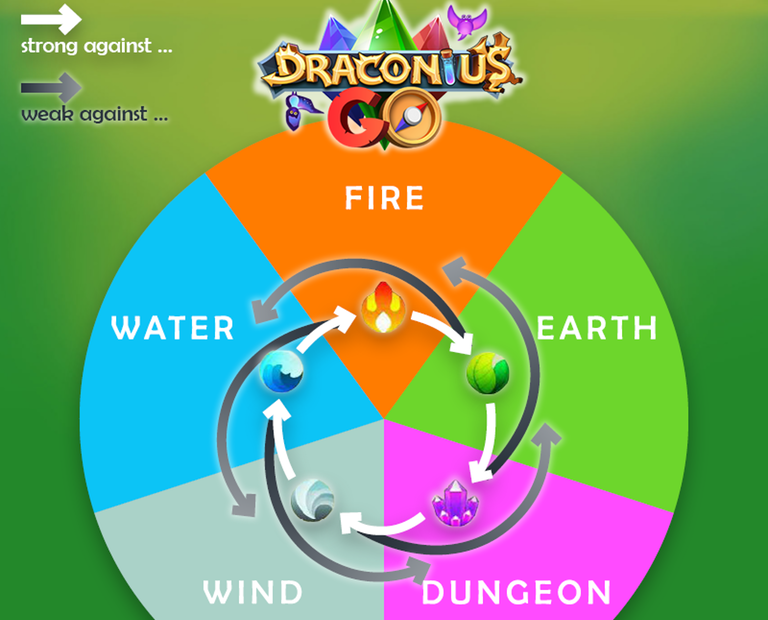 When you untangle the graph illustrated above, you get the following table as a result:

However, due to the circular nature of the type system in Draconius GO, each element has also two additional properties that can be calculated from this table:

For example, for Arcana, the complete type information set is as follows:

Draconius Go Cost per Power Up: Essence and Stones