Legendary Beasts Raikou, Entei and Suicune are currently roaming the Pokemon Go world. At present Raikou can be found in the Americas, Entei in Europe and Africa, and Suicane in the Asia-Pacific region. They were released after Legendary Birds Articuno, Zapdos, Moltres left the Game on 31st August.

A lot of trainers by now have both Raikou and Zapdos, and thinking which Legendary Pokemon is stronger and should be Powered Up: Raikou or Zapdos.

Why not both Raikou and Zapdos?

As stardust is limited and valuable in Pokemon Go, one has to think before spending it to Power Up any Pokemon.

We will compare both the Legendaries base stats and moves in this analysis to help you decide on Raikou or Zapdos:

So as you can see, their stamina is the same. Zapdos has 12 more attack, while Raikou has 22 more defense. Since their stats are pretty similar, it comes down to their move pools.

These values were obtained using PokeGenie, which considers energy gain and gives cycle DPS for how well the moves work together. This doesn’t consider rounding because that, as always, depends on the defense of the Pokemon they are attacking. For a general defender (as opposed to a raid boss with a known fixed defense) it is best to not include rounding effects as every Pokemon that is defending in the gym has a different level, a different defense value, and a different defense IV. The one that does more DPS normally gets the benefit of rounding more often than the one that doesn’t.

Also known as total damage output, or how much damage it can do before it faints. If you take the ratio of Moveset DPS and then multiply by the ratio of the ATK, DEF and STA that gives a good approximation. 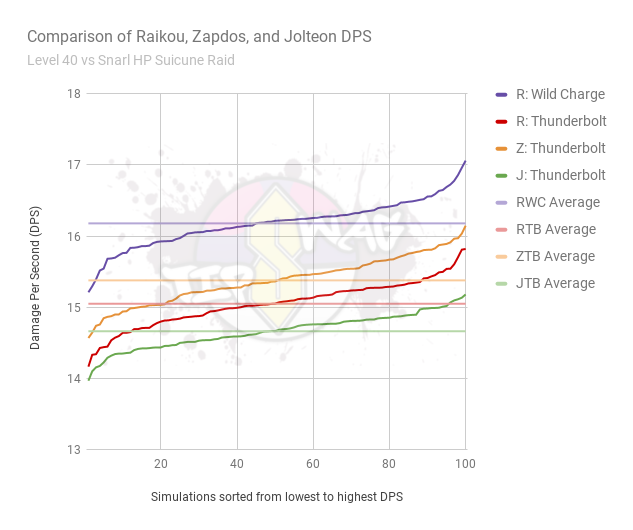 Raikou is approximately 17.26% better than Zapdos. Considering that there are no good Raids that Zapdos will be above-and-beyond more useful for than any of our current attackers, the average player is better off saving their Rare Candy and Stardust for Raikou rather than spending it on Zapdos (if only for strategic purposes).

Additional Thoughts on Raikou vs Zapdos

Raikou is worth leveling up because of the large number of raid bosses weak to electric and the fact that he’s vulnerable to so little. Specifically, he should be: