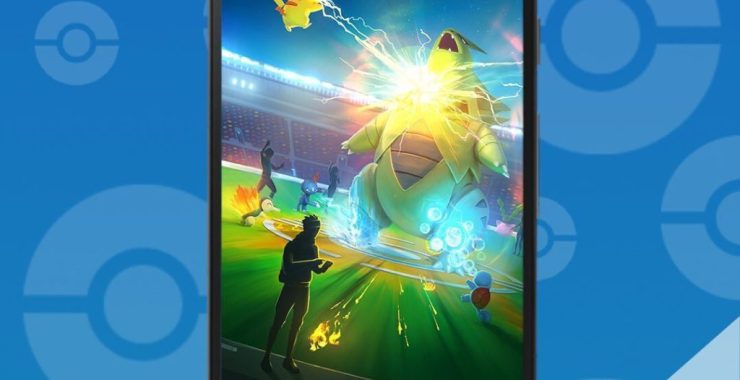 By now you have probably all seen the impressive-looking raid bosses with their astronomical CP numbers. I decided to analyze how strong these bosses actually are and how many players will be needed to defeat them.

Let’s have a look. If we divide the CP of a raid boss (~20000) by 9 we get a CP number (~2200) that you’re used to battle. Assuming that raid bosses don’t have their stat ratio shifted (and the damage to Kabutops at 0:57 in this video roughly supports this assumption) and ignoring damage rounding the following is true:

Combining these facts leads to the following:

Now we can calculate how strong you need to be to defeat a raid boss. For example, suppose that you’re battling a 22500 CP Tyranitar, and you’re on your own. Defeating the boss within the 300 second time limit is equivalent to defeating nine 2500 CP Tyranitars in 300 seconds, or 33 seconds per Tyranitar. Not difficult eh? Defeating the boss before your 6 Pokemon faint is the main challenge; it’s equivalent to defeating 27 Tyranitars of 2500 CP each, in other words you need to go 1 vs 4.5. Difficult for sure, but absolutely not impossible with high level Machamp/even Vaporeon, especially if the boss has sub-optimal moves.

Solo raids are possible against easier bosses for high level trainers, but there is some risk of failure involved. Duo raids shouldn’t be too difficult against non-Blissey bosses if you have strong attackers and you can dodge well. Blissey raids require more players, and just like normal battles they are heavily dependent on Blissey’s moveset. A rule of thumb is that 5 players is just enough if you can go 1v1 against a 1/9 CP enemy. Low level trainers shouldn’t feel afraid or left out, with a large group you can take on anything.

Niantic just changed the multipliers for STAB and type effectiveness as follows:

This gives the following changes compared to before in different situations:

Pokebattler supports raid bosses too! Check out this example where a raid boss Tyranitar is defeated by just 4 Machamps.

Niantic’s help page is not fully clear on the mechanics of rejoining a raid. The relevant text (from this help page) is the following:

“If you are not able to defeat the Boss in the battle, you may rejoin the raid and battle again. You won’t need to use another Raid Pass to rejoin; your pass will grant you access to the battle for the duration of the raid. You can join as many times as you’d like before the raid ends.”

This can be interpreted in two ways:

In the first case the power requirements can be removed, as you can simply keep rejoining the battle after your Pokemon faint. A little extra time will be needed for this though.