While the health benefits of extra exercise spent frantically searching for Pokémon in the augmented-reality mobile game Pokemon GO have already been confirmed, a new report in the scientific journal Nature‘s Scientific Reports section has found that it can also combat stress. According to the report, full-time workers who played the Niantic-produced game for a month or more reported significantly lower levels of psychological stress than those who didn’t.

Since Pokémon GO‘s psychological effect has so far only been anecdotal (such as a reduction in suicides in Japan shortly after it was released), scientists have completed a study into what effect the game has on mental health. A team from Tokyo University, led by Professor Norito Kawakami, conducted online surveys with 3,915 full-time Japanese workers in the period November 2015 to February 2016, and follow-up surveys in December 2016. Of these, 246 workers (9.7 percent of the total), had continued to play the game for over a month.

The workers were all asked to answer a “Brief Job Stress Questionnaire (BJSQ)” to determine their levels of psychological stress in order to assess any changes over the time period, alongside other questions regarding work performance and other factors such as smoking or drinking habits.

“While the extra walking is undoubtedly good for health, some people’s Pokémon-hunting obsession had them playing in the wrong places, as this sign from Nijo Castle in Kyoto suggested.” 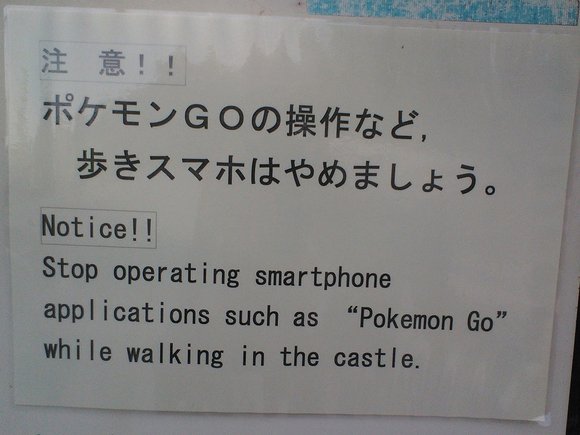 As well as the pronounced difference in self-reported stress levels, physical complaints among those who had played the game for over a month had also lessened slightly. While the report didn’t attempt to pinpoint the reason behind the stress-busting power of Pokémon GO, its authors surmise that it may be down to increased physical exertionand socialisation among players.

The game isn’t always good for health though, as the report cites potential risks of playing the Pokémon GO as being:

And, as we’ve reported before, the sheer rapture at capturing a rare Pocket Monster can kill. Then again, balance that against getting off the sofa and actually walking around more than we otherwise might, plus the excitement of the hunt, and they seem like risks worth taking for the benefit of our health.

While there were a number of limitations with the study, for example, the average age of those who continued to play Pokémon GO for more than a month was much younger than those who didn’t, we can add this to the growing list of scientific (and non-scientific) reports backing the myriad pros of gaming. Pokémon GO‘s popularity may have peaked but augmented reality games are here to stay. Good news for gamers – with the scientific seal of approval there’s never been a better time to play guilt-free!