In Jurassic World Alive players can collect DNA from dinosaurs spawning in wild or get DNA from incubators. Once players have the required DNA they can create that dinosaur or some dinosaurs can be fused together to create a stronger hybrid dino.

Hybrids are generally stronger than their normal counterparts and can have more skills, as they can have multiple skills of the parent dino.

To understand hybrids better, lets first have a basic understanding of wild spawns and how are dinos created and evolve them in Jurassic World Alive.

Players can encounter all the Dinosaurs in the wild and collect DNA from them. But as the rarity of the Dino increases the amount of DNA collected will decrease. For example, if a player is at level 6, they get 16 DNA for a direct hit on a common Dino, 12 for a rare and 11 of epic.

On top of that, the amount of DNA required to create a Dinosaur also increases with rarity

Players can also collect DNA from incubators, which are really helpful in collecting DNA for epic level Dinos. Creating A dinosaur does not cost any coins.

Steps to create a Dino:

Once you have created a Dino, you can now evolve it to make it stronger. But to evolve a dino you need DNA and coins and the cost of evolution keep on increasing as the level of the dino increases.

Evolving a dinosaur increases its health and damage stats only other stats are not affected.

Why evolving a dino important?

Evolving a dinosaur makes it stronger and more useful in battle and to create a hybrid, a hybrid can only be created if the parent dino is of the required level.

Fusing is another way to create a Dinosaurs in Jurassic World Alive, these dinos are called hybrids. To create a hybrid you need two specific adequately evolved Dinos and their DNA. Fusing dinos to create hybrids cost parent dinos DNA and coins.

For Example, to create a Nodopatosaurs (a hybrid dino), Apatosaurus and Nodosaurus should be at least of level 10 before you can fuse them. Then you need adequate DNA of both the dinos, in this case, 50 DNA and 100 coins to fuse them and create Nodopatosaurs DNA. The amount of DNA created is random and can be anything from 10 to 90. Once to have created 100 Nodopatosaurs DNA, you can create that hybrid.

Once you have created a hybrid dino, it can be evolved by creating DNA through the same process.

Below we have a hybrid fo Einiosaurus and Nundasuchus, Einiasuchus. It can be evolved by fusing and creating DNA from the parents.

The levels of dinos needed and amount of coins varies depending on the rarity of the hybrid you’re trying to produce:

How to find possible hybrids

Just visit the dinosaur collection, if you collected or even encountered a dino in wild, you will see a section called ‘Possible Hybrids.’ Simply scroll down below the evolution section and you’ll find it right above the Stats. 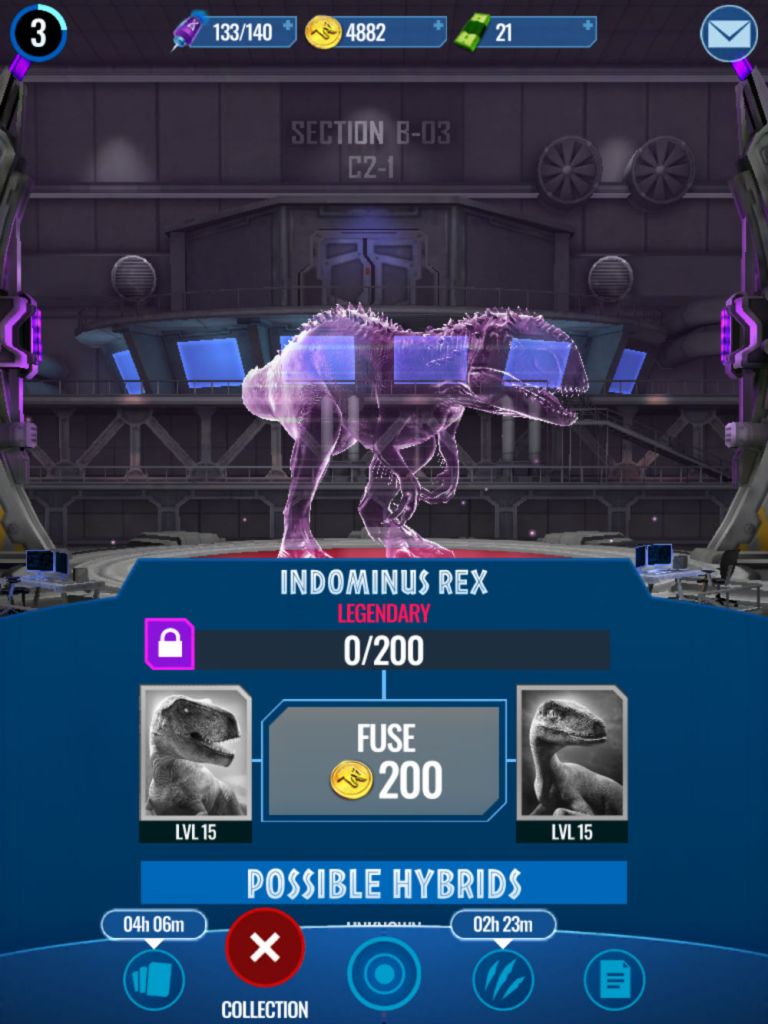 If you haven’t a dino, the options here will show up as ‘Unknown’ and simply show the Jurassic World logo. However, if you have encountered a dino, you will see a picture of the dinosaurs and be able to tap on it to view it.

Why hybrids are better than normal dinosaurs

Hybrids are cool but are also stronger and more useful in battle as they have a couple of things going for them.

First one is that they don’t start at level 1, so as soon as you create them they are useful in higher level arenas.

The other useful hybrid trait is that they appear to have more abilities, as many as four. That obviously means you’ll have more options in each round of a battle and likely will have something other than the basic attack that isn’t on its cooldown at any given time.

Make sure to join our Discord server and Subreddit.